From an authentic train ride you’ll never forget to delicious Burmese food or encounters with fortune-tellers, these unmissable attractions across Myanmar have something to offer everyone.

Even as travel to Southeast Asia becomes ever more popular with visitors from around the world, Myanmar remains an enticing mystery, a spot with a different feel to its neighbours. People here are embracing a new-found openness to travellers, and in a region already famed for friendliness, tourists can still be surprised by Burmese people rushing to help out a foreigner who looks even remotely lost.

Couple that kindness with stunning architecture, soulful food and a treasure trove of temples, and you’ve got the perfect destination.

Best time to visit: between November and February, when the temperature dips and the rains stop. The monsoon season can last from May to October, while March is often one of the hottest months. It may be tempting to visit during a big celebration like Maha Thingyan (or Water Festival), which usually occurs in mid-April, but this can be a rather sleepy period, when many businesses shut for over a week.
Key phrases: like many southeast Asians, Burmese people will express delight if an outsider learns even a few words of their language. And is there a more melodic way to say hello than “mingalaba”?
Burmese food: often overshadowed by the cuisines of its neighbours India, China and Thailand, Burmese dishes pack a punch all of their own. From tart salads made from pickled tea leaves to desserts with a sweetness that comes not from sugar but from coconut milk and tapioca, there’s something new to explore in every bite. Don’t leave without trying the unofficial national dish, mohinga. This bowl of Burmese noodles swimming in a broth of fish, shallots and topped with a hard-boiled egg is not to be missed.
Etiquette: Myanmar has one of the highest percentages of Buddhists in the world, and many etiquette-related matters stem from the deep beliefs here. Avoid touching another person’s head, which is considered a sacred part of the body. The foot is considered impure, so it’s rude to sit with your feet pointing at anyone. When passing over money or pointing, try to use your right hand rather than the left, as the latter is considered unclean.

Things to do in Yangon 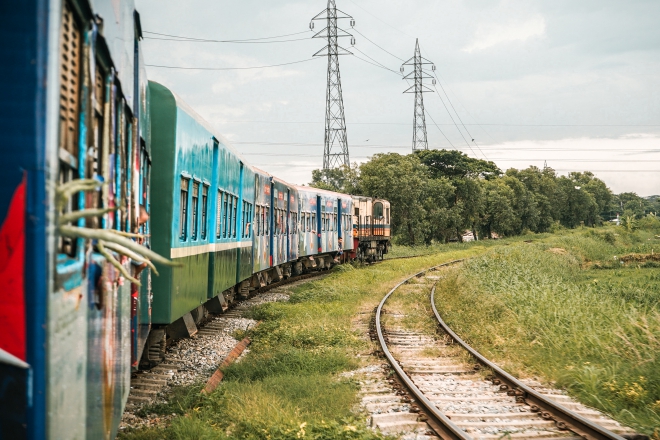 Explore the Area by Rail
Just landed and wondering what to do in Yangon? One of the best ways to explore the city is to ride Yangon’s Circular Line train, though it is not known for its creature comforts. The train has been called “charmingly decrepit”, and with its creaky, non-air-conditioned carriages that move at a snail’s pace, it’s not hard to see why. But it’s a great way to snake through a large swathe of the city and come face to face with locals on their daily commute.
Shwedagon Pagoda
Proudly standing at 99 metres tall, caked in gold and covered with 7,000 precious stones, this is one of the most awe-inspiring Buddhist sites in the world. Sunset is a great time to visit, as you can catch the stupa as it glitters in the fading rays, and then lights up for the night. Make sure you dress modestly in clothes that cover your shoulders and knees to gain entrance. If needed, you can buy some fabric to cover yourself at the entrance to the pagoda.
Bogyoke Market
Boasting some 2,000 stalls, this bazaar, also known as Bogyoke Aung San Market or Scott Market, is a good spot to find clothes, handicrafts and curios. The vibe is touristy, but not only is this a practical place to find traditional fabrics; you can also have outfits quickly made or altered at bargain prices (provided you bargain skilfully, of course). Tip: if you run out of cash, there are ATMs in a few corners of the market.

Palm Reading
Belief in fortune-telling runs deep here. You’ll see many Burmese consulting numerologists or palm readers who have set up shop in busy public areas. Some boast stalls with posters and mystic paraphernalia, others simply squat on a blanket on the pavement. Many palm readers can be found outside the Sule Pagoda, so you can pair a visit to the site with a quick fortune-telling session. A few enterprising fortune-tellers even offer different rates depending on your depth of question: a small sum to peek into the next five years, and more if you want the nitty-gritty details of the rest of your life.

Shopping in Myanmar: What to Buy

1. Longyi: when it comes to beating the heat in comfort, there is nothing better than the longyi. You’ll see men and women alike donning this traditional, sarong-like length of fabric. You can find longyis for next-to-nothing in markets, or hit upscale boutiques for catwalk-ready chic versions — some which even come with handy pockets, a modern take on the traditional pocket-free version.
2. Tamarind flakes: need a treat for friends back home? Surprise them with the exotic local sweet made from flakes of the tamarind fruit. Its sweet-sour flavour may be an acquired taste, but trust us — it grows on you. Alternatively, tuck into nuggets of jaggery. These balls of sugar cane are a Myanmar food favourite and it’s hard to just stop at one. It livens up a hot drink fantastically, so try dropping one or two shards in your tea.
3. Gold: Myanmar has a love affair with gold, and if you visit King Galon Workshop, you’ll probably leave just as entranced. Here, craftsmen tirelessly beat gold into tissue-thin slivers of gold leaf, all by hand. The leaves are then used for a variety of purposes, from beautifying the skin to gilding statues.

Feel Restaurant: choice overload meets flavour overload at this lively lunchtime spot. The buffet line is crammed with customers picking out whole prawns, rich mutton curry, succulent fishcake wrapped in leaves and more. And it may seem incongruous after tucking into traditional Burmese food, but the meal is perfectly topped off with Italian ice cream from the restaurant’s in-house gelato stand. After that hefty meal, walk off the carbs in the nearby National Museum.
999 Shan Noodle Shop: no Yangon jaunt is complete without a visit to this favoured haunt, nestled near City Hall, to try warm, spicy sticky Burmese noodles. The atmosphere might be hole-in-the-wall, but the flavours are five-star. There are non-noodle dishes, like the delectable chickpea “tofu”, but the stars are the delicate rich noodles in a spicy chicken broth. It’s a popular spot, so go for a late breakfast or early lunch.
50th Street Bar and Grill: this expat favourite is a friendly hub, boasting regular comedy nights, pub quizzes and classic international fare like quesadillas and burgers. It’s not traditional Burmese food, but with its warm vibe and magnificent setting in a 100-year-old two-storey building, 50th Street bar in Yangon is well worth a visit. Especially as it’s a great place to pick up travel tips and local gossip. 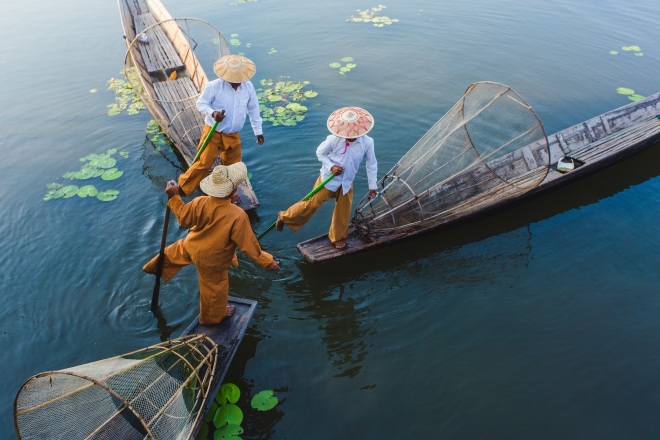 Enthralling Inle Lake
If you only have time for one other place to visit in Myanmar, make it Inle Lake. Some 10 different traditional Burmese ethnic groups call this spot beneath the Shan mountains home. You can explore their villages — including one floating in the lake itself — bike around the area, and even visit a local winery or two. But if you really want to complete the bucket-list experience, hop on a hot air balloon and swoon over the views from 3,000 metres up.
Sunrise from the Air
It’s strange that so many have heard of Angkor Wat, and so few have heard of Bagan, a temple plain that has to be seen to be believed. And the best way to see it is from the air. Tour operators offer dawn flights where you can get a bird’s-eye view of over 2,000 temples — and a champagne breakfast afterwards.
An Epic Antique Bridge
Mandalay, Myanmar’s second-largest city, is also the country’s religious heart. Stroll the magnificent (but slightly rickety) U Bein Bridge and you are likely to encounter more than a few cheerful monks. Mahagandayon Monastery, home to some 1,000 monks, is nearby.
Did you know? Spanning around 1,200 metres, U Bein Bridge is believed to be the longest teak bridge in the world, and dating back to the mid-1800s, among the oldest too. A good fact to chew over as you watch the sun reflecting off Taungthaman Lake.
Stunning, Sun-soaked Sands
Ngapali Beach (pronounced “napali beach” and said to be named after the Italian city of Naples) still feels like a well-kept secret for travellers wanting gorgeous sands, rustling palm trees and turquoise waters. But this stretch, arguably one of the best beaches in Myanmar, is getting more popular by the day. While perfect for sunseekers, there’s also plenty to do in the area, from fishing boat tours to biking in the nearby mountains and hoovering up as much fresh seafood from beachside restaurants as you can handle.
Find Your Hotel
Whether you want to watch the sun set over the Shan hills at Sofitel Inle Lake Myat Min, or soak up Yangon’s beauty in the heart of the city, there is a hotel for you. Find your perfect stay now.

OUR GUIDE MYANMAR OUR HOTELS IN YANGON

In Canada, there are strict rules for waiting for the bus…

The top 10 most unusual places to visit in Barcelona

The top 10 unusual places to visit in Tokyo