Immerse yourself in the vast beauty of the ocean kingdom and discover the spectacular marine life that it holds.

While many seek out the Maldives as an ideal spot for a honeymoon or relaxing romantic getaway (soaking up the sun and sipping on fresh coconut juice is a great combination after all) – the real adventure begins as you begin to explore below the surface of the island’s shimmering turquoise waters.
The Maldives is comprised of 26 atolls; ring-shaped coral reefs and islands where most diving sites are located.
Whether you’ve just got your certification or are looking for a more challenging diving experience, this guide highlights some casual diving destinations near our Kooddoo and Maamutta resorts, along with a few challenging dive sites situated further out at sea.

A 10-minute boat ride from our Kooddoo resort, Gaafu Alif Atoll is best known for its unspoilt coral reefs and its shark dives. Expect to encounter sea turtles, surgeon fish and a variety of shark species including hammerhead sharks.
Highlights from the atoll include Coral Garden, which houses dozens of hard coral species across a 2km stretch, and Maareha Kandu - home to grey reef sharks and eagle rays. Experienced divers who fancy braving the 30m descent at Villingili Kandu are in for a treat – keep on the lookout for barracudas and white-tip reed sharks.
Get in touch with Suvavida Divers Maldives to arrange dives around the Gaafu Alif Atoll. Between January to April, they arrange a special night snorkeling sessions with Whale Sharks.

Not too far from the Maamuutta resort, the South Ari Atoll is famous for attractions such as the four canyons of Reethi Thilla, which translates to ‘beautiful open reef’ and Fen Maa Dhigurah, the largest marine protected area in the Maldives.
Hukuru Elhi Faru, otherwise known as Manta Point, is worth visiting for obvious reasons – it’s one of the few places you can see the mysterious sea creatures in the flesh.
Kudah Rah Thila is highly recommended for experienced divers, a small but colourful reef packed with a variety of soft corals including yellow daisy corals and a hot spot to find large schools of blue striped snappers. Head further north to Kudah Rah Thila and explore the split reefs of Broken Rock, where you can commonly find napoleon wrasse, turtles and many varieties of moray eels.
For dive trips across the South Ari Atoll, book a trip with Island Divers. They also offer PADI Scuba Diving courses and certification for first time divers.

Known as one of the most exciting dives in the Maldives, divers willing to ride the currents of Kandooma Thila in the South Male Atoll will get the opportunity to swim amongst packs of large tuna and giant trevally. Be sure to explore the caves that lie 23m below the surface too.
Fotteyo Kandu in the Vavvu Atoll boasts the largest unbroken barrier reef in the Maldives, stretching 50 kilometers long. The area is best known for its manta ray sightings and a seasonal congregation of whale sharks (which has to be witnessed first-hand)!
Home to a large green sea turtle population, the Kuredu Caves in the Lhaviyani Atoll are a favourite spot amongst local divers thanks to ‘Turtle Airport’. Named after the trajectory of the local residents surfacing to catch their breath, it’s one of the best places to observe sea turtles in close quarters.

OUR HOTELS IN MALDIVES 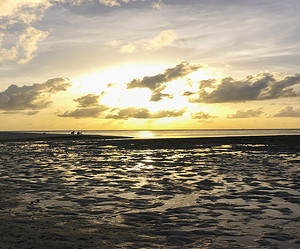 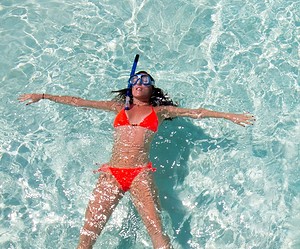 Top Tips for Snorkeling in the Maldives

Dive into the heart of Bali's coral reef

Top 10 Unique Beaches in the World

The Best Places to Catch the Sunset in Dubai

The Top 10 Sunset Locations in the World