The Covid-19 pandemic has had a significant impact on travel. At Pullman Maldives All-Inclusive Resort, we operate in the most hygienic conditions possible, to meet Accor's ALLSAFE cleanliness and prevention standards.

Look no further for your dream beach vacation. The Pullman Maldives All-Inclusive Resort is a beach resort in an untouched part of the Maldives with a natural lake. From the private shade of the forest to the soft beaches and the crystal-clear water, it's hard not to fall in love during your stay.

There's plenty to keep you occupied during your stay - from tennis, golf, other sporting facilities, to water sports and beach activities, there's plenty to choose from. Our friendly staff and many facilities also cater to children, making our holiday. With a variety of dining locales and cuisines available, you'll never be at a loss for what to eat. Our restaurants and bars also offer exquisite views over the gorgeous beaches and water, with every meal set against the breathtaking Maldives views.

Located in the South of Maldives, Maamutaa Island in Gaafu Alifu Atoll is where our playground is based, set amidst 18 hectares of lush vegetation and surrounding a natural lake, our commitment is to offer our guests the holiday of a lifetime.

Our flexible all-day dining restaurant features signature fusions of Maldivian, French, Arabic, Italian, Chinese and Indian cuisines. Embark on a journey of tantalizing aromas and almost-ready sizzles at one of our live cooking stations restaurant.

Colorful and innovative creations for vegetarians, vegans and the culinary curious. Phat Chameleon is a celebration of food in an organic herb and vegetable garden that stimulate the senses. A rarity in the Maldives that revolutionises meat-free dining.

The Hub is where you can meet, eat, drink, work, relax and seamlessly connect. A destination in itself, this outdoor hot spot and bar is the place for many inspiring gettogethers, events and activities - day and night.

Enjoy your evenings at Saffron Affair, a perfect romantic setting to enjoy vibrant Spanish, Arabic and local tapas. The restaurant is a more relaxed and intimate setting designed to immerse you in mesmerising sunsets and long evenings with great company.

Start your day with an an energising breakfast whilst watching the sunrise and soaking up the sea breeze at Sol Rising. The overwater cafe offers a healthy breakfast full of superfoods giving the energy needed for a busy day at the resort.

Nothing beats a good night's sleep. That's why we are always looking for ways to make bedtime better. The new Pullman Bed experience helps you to wake up feeling at your very best in our beach resort and ready to take on the day. Our 122 luxury villas are not only designed to suit all your needs, but also with a modern and stylish design in harmony with the island. On the beach, over the water or even under water, get ready to 'check in and chill out'.

Nawaz (at the Junction) and Taher (at the middle eastern corner of buffet) were amazing. 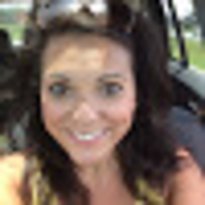 The good…Great stay at the Aqua Villa. Nawaz at The Junction was very energetic and friendly—service like that is why we came back for a second time! Taher at the middle eastern section of the buffet was wonderful and made delicious food! Hassan (who I believe is the manager of food and beverage) was extremely friendly and somehow managed to remember the names and details of EVERY resort guest the entire stay. Also, it was my mom’s birthday, and each of the staff wished her a happy birthday. We can’t thank the staff enough for showing us such a wonderful time, and we look forward to returning next year! However, there is some constructive feedback that I feel is warranted. We were there for 8 nights, and for the first 6 nights we had an amazing experience. However, customer service overall has certainly taken a downturn since our stay in 2021. While our first 6 nights had AMAZING housekeeping service and room service; on the last 2 nights of our stay housekeeping was non existent and room service was even more so. We had to complain to get the mini bar restocked. We got the $200 floating breakfast (which was nothing more than selections off their buffet) and I left a hefty tip on top of the gratuity already charged assuming they would be on top of cleaning up once we were done. Despite the hefty tip, and despite calling twice to have the leftovers picked up, they never showed up to pick it back up and a bird made a HUGE MESS all over the deck of our villa that I had to get on my hands and knees to clean up the mess. It wasn’t until I demanded to speak with the manager and complained, that they came and picked up the mess that I had already cleaned. While the manager from the junction offered an apology, I did not feel it was sincere at all and appeared to be only giving us lip service. Additionally, when we checked into the aqua villa, the tank glass was so dirty that you could not see out of it. When we asked to have it cleaned at 10am, they promised they were sending someone right away. We sat and waited until 5:30pm! And that was after having to call every hour. Also, I would strongly recommend not booking the Aqua Villa for the last day of your stay. Our flight was not until 8pm, but the resort tried to book us for a morning domestic flight (which would have left us hanging out at the Male airport for SIX hours!!!) just so they could get us out of the Aqua Villa early and rent it to someone new. I refused to take a flight that early and sit around for 6 hours at the airport, so after a very uncomfortable 2 hour long interaction with the manager at the junction, they finally agreed to rebook us for a later domestic flight. Despite staying at the resort until 2:30 (rather than the 11am time they had initially demanded), the manager told us that we would still have to be out of the Aqua Villa before 11am—even though the terms of the rental stated checkout was at 12pm. The manager instead placed us in their cheapest accommodation for the remainder of the day (a beach villa), claiming that villas with a pool were not available (this was clearly a lie… in fact half of the ocean villas were not occupied at all during our stay). The cherry on the cake was that when we were leaving the resort, the staff that came to retrieve us told us that there was a missing clock radio, scale, and writing pad from our room. I know for a FACT that those items were in our room, and I certainly did not take them—so I’m not sure what their angle was in lying about items being absent from the room that I know were there when we left. Poor management was obviously the culprit for the bad facets of our stay. They should promote Nawaz to the management position, who demonstrated superior customer service skills and a very pleasant demeanor. I feel like Nawaz would ensure the customer service we enjoyed during our 2021 stay. However, the other facets of our stay were superb, and the employees of this resort really strive to provide an excellent experience. We look forward to returning next year—and hopefully by then they’ve put better leadership in place.

Wonderful place and great taste in every detail.

Sha is the manager of this beautiful Hotel. He is very attentive to details and very helpful. He managed a local metal for us to experience. Sha, thank you for your kindness. Your experience certainly makes all details in sync. Thair is a chef who prepared us a wonderful meat kibab. Very fresh and delicious. The best I ever taste in my life. Mara a pleasant Spanish lady with her smiles takes you to your seat. Your drink recipe was amazing. Shqwwaf is a boat driver. Thank you so much for your help in finding my husband wallet again. Your kindness is well note.

The resort is beautiful, all the staff are wonderful, if we needed anything there was not a problem and if there was a very small problem then the problem was solved immediately. The food amazing at all times

We had an amazing stay at Pullmans Maamutaa … diving off the local reef, sunset cruise and fresh, delicious food were highlights. Accommodation in the over the water sunset villas was pure luxury.

Dear Ms. H., Thank you for taking the time to share your experience regarding your recent stay at the Pullman Maldives Maamutaa. It’s so wonderful knowing that you had a perfect stay on the island. You are correct, our overwater villa is one of the highlights of our resort. Lying down on our sunbed watching sunset should be one of the bucket lists when coming to the Maldives. Your highlighted points about the departure flight status have been brought up to our top management team and it is well noted for our training and learning experience Once again, thank you for choosing Pullman Maldives Maamutaa for your holiday. Whenever you consider returning next time, please do not hesitate to reach out to us at any time. It will be our absolute pleasure to welcome you back and make sure your next stay will be flawless Sincerely, Ken Nguyen Guest Experience Manager 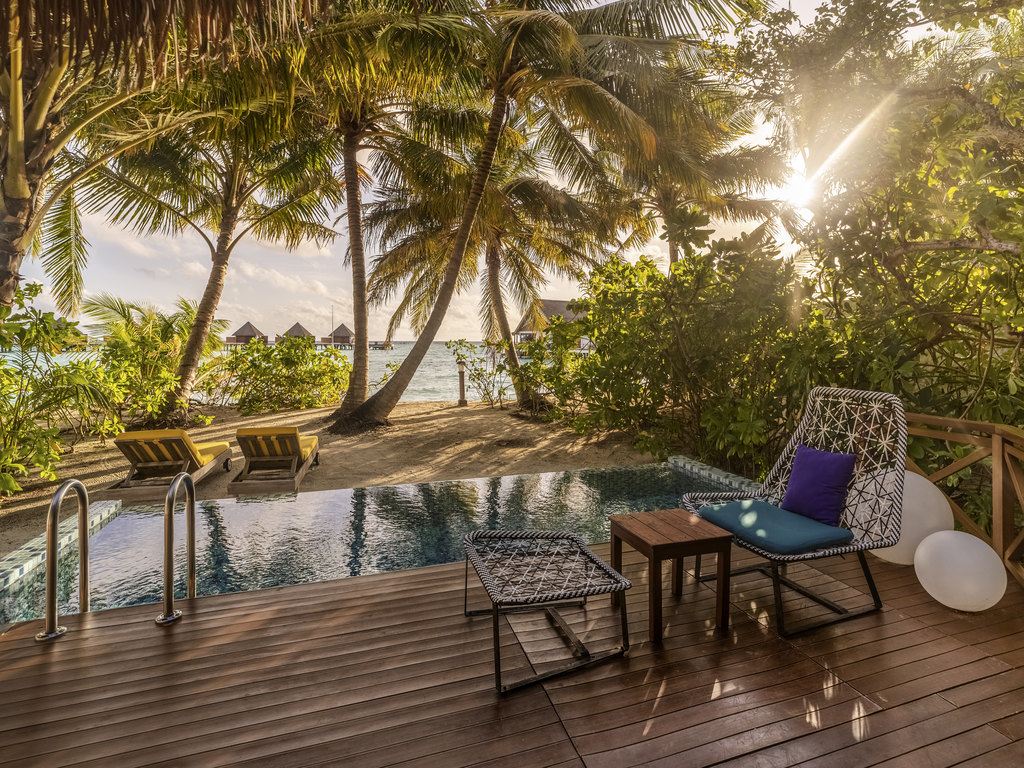 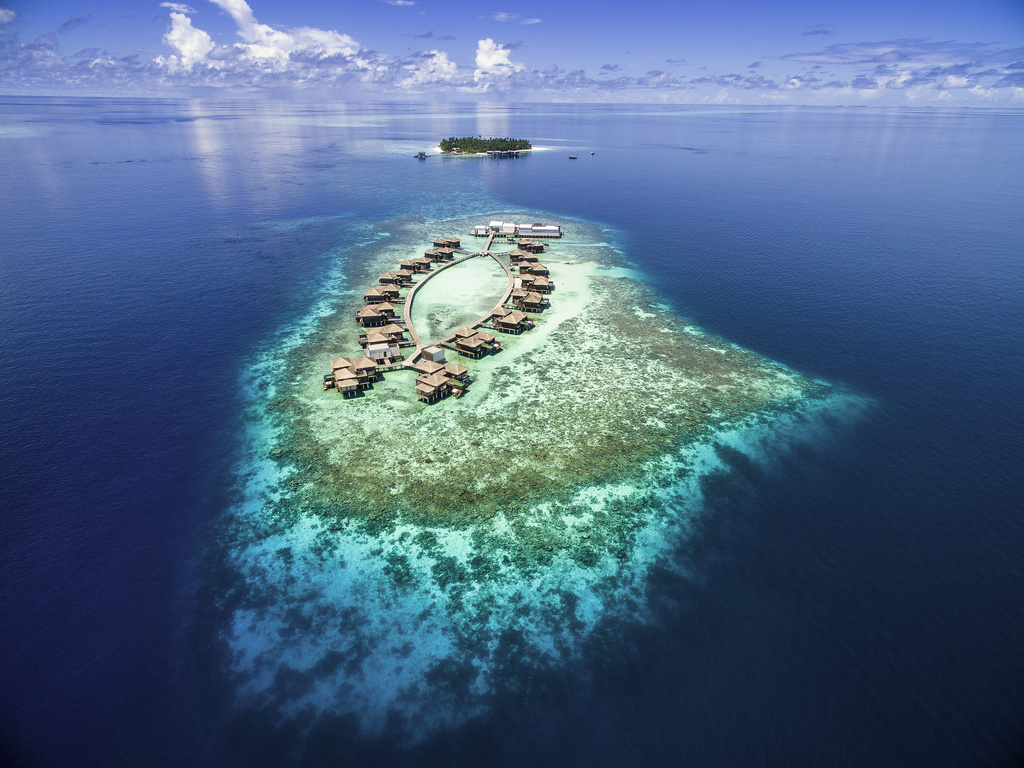 See the hotel
All our hotels in MAAMUTAA ISLAND