Divided by the Yarra River, Melbourne is a city of many faces.

From Fitzroy in the north to St Kilda in the south, both sides of this culturally diverse metropolis have distinct styles. If you’re trying to create a perfectly balanced itinerary, we can help you navigate Melbourne’s north-versus-south debate with this snapshot of the city’s highlights.

The Best of the North

Fitzroy
Fitzroy is fast becoming one of the coolest suburbs in the north of the city. A mecca for all things artistic, this inner-city enclave is populated by hordes of hip students and young professionals. If you want to see what a quintessential Melbourne street looks like, Fitzroy’s main drag is lined with terraced houses, quaint old pubs and trendy bars.
Despite a healthy dose of gentrification, this suburb has so far managed to hang on to its grittier side. Whether you want to grab a coffee in a trendy café or make like a local and go bar hopping on Brunswick Street, Fitzroy’s unique charm is always worth venturing north of the Yarra for.
To get to Fitzroy from the CBD, simply jump on the number 86 or 96 tram leaving from Gertrude Street.

Flemington 2011 Mark Chew
Flemington
Hosting the Melbourne Cup isn’t the only thing Flemington has going for it. Packed with cool eateries and Edwardian-era buildings, this suburb’s unique style and hidden retail gems set it apart from other north Melbourne neighbourhoods.
While sightseeing in Flemington, be sure to dine out on flavour-packed Malaysian and Chinese cuisine at renowned restaurant Laksa King. You could also pick up some antique treasures at Rusty Rose Vintage Textiles and Homewares, or go full Melbourne hipster and shop for vintage threads at Hidden By Me.
If you feel like treating yourself to a day out at the races, see what’s on at Flemington Racecourse.
Brunswick
Located just 11 kilometres north of Melbourne’s CBD, Brunswick is a haven of grungy street culture. Alongside all the beer gardens and wine bars, the main street of Brunswick is also scattered with Mediterranean and Middle Eastern restaurants, shisha lounges, and cult coffee shops.
To stock up on vintage souvenirs and quirky homewares, make your way to the Lost & Found Markets in Brunswick East. Featuring over 60 stalls, exploring these markets is a Melbourne rite of passage.
The Lost & Found Markets are held from 10am to 6pm every Friday, Saturday and Sunday.

The Best of the South

St Kilda
Once a glitzy resort district, St Kilda has adopted more of a relaxed vibe in modern times. Despite being home to one of Melbourne’s premier football teams, this beachside suburb is much more than just a hub of AFL fanaticism. Beloved by Melbournians, St Kilda is renowned for its beachfront setting and old-world architecture.
The heart of St Kilda can be found along its picturesque esplanade, a span of waterfront restaurants and meandering bike paths. While exploring this part of St Kilda, be sure to keep an eye out for the little penguins that sometimes hang around the breakwater.
Indulge your sweet tooth by visiting some of the European-style cake shops on Carlisle and Acland streets in St Kilda.

Olio e Pane - Visit Victoria
Hawthorn
Hawthorn combines inner-city buzz with a family-friendly atmosphere. Situated just east of the CBD, it still bears the marks of a gold rush that took hold of Melbourne in the 1860s. Fancy architecture and boom time mansions can be found scattered throughout Hawthorn’s streets, alongside leafy parks, vintage cinemas and second-hand clothing stores.
To experience some of the best dining found on the south side of the Yarra, make your way to Liar Liar. This cosy café brews up some of the best coffee and housemade treats in Melbourne.
Liar Liar is located at 90 Kinkora Road, Hawthorn.
South Yarra
With its art deco apartments and gourmet restaurants, South Yarra is symbolic of Melbourne’s upmarket side. From art galleries and historical buildings to fancy cocktail bars and quirky bistros, it has everything to keep cultured travellers entertained.
Located just a stone’s throw from the Royal Botanic Gardens, South Yarra is an ideal destination for leisurely strolls. History aficionados can discover the city’s colonial past by taking a tour of Como House, a beautifully restored manor built in 1847. To experience the city’s famous fashion scene, shopaholics will love the boutiques found along Chapel Street, one of the city’s main shopping thoroughfares.

No matter which side of Melbourne you like the look of, Accor can help you find somewhere to stay. View our accommodation options in Melbourne today. 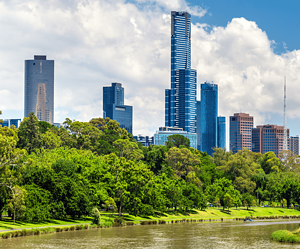 The best cheap and free things to do in Canberra

The Best Summertime Attractions in Australia

6 Things to do in Hobart in Rain, Hail or Shine