Even those who have traveled to the Marvelous City have plenty of reasons to return. New attractions have emerged in all regions of the city, meaning there is always something new and surprising to see there. How about starting to plan the holiday trip right away? Check out our selection with the new tourist spots in Rio and know exactly what to do in Rio de Janeiro on the next visit.

The attraction of Rio de Janeiro that is causing a buzz is the Light Rail Vehicle, better known as VLT Carioca. Very similar to the traditional cable car, the transportation runs through the center and the port area to Santos Dumont Airport. Enjoy the trip to make strategic stops at tourist attractions in the city, such as AquaRio, the largest marine aquarium in South America, and the Rio Art Museum (MAR). Tip! after visiting all the exhibitions, have lunch at the Restaurant Mauá, located on the museum's roof.

Get to know Porto Maravilha

After having undergone a revitalization process, the port area of Rio de Janeiro became one of the most interesting points for tourists. Today the place is called Porto Maravilha and keeps a number of cultural spaces and activities, such as food trade fairs, museums, concert halls, and monuments. The highlight is the colorful wall "Todos somos um", by renowned graffiti artist Eduardo Kobra. The work, which portrays different indigenous ethnicities, received the title of greatest graphite in the world by Guinness World Records. It is worth registering a selfie in front of the place!

Fall in love with the Museu do Amanhã (Museum of Tomorrow)

Impossible to go through Praça Mauá and not be impressed by the imposing architecture of the Museum of Tomorrow, one of the most incredible sights of Rio de Janeiro. The futuristic and scientific mood goes beyond the construction, designed by the Spanish architect Santiago Calatrava. The museum promotes interections that show the impact of human actions on the environment, always focusing on sustainability. The main exhibit has five thematic rooms, which cover themes such as the cosmos, the earth, and human beings. Do not forget to take the camera to record everything.

The AquaRio is the newest tourist spot in Rio de Janeiro. The space has 28 tanks and enclosures and has the capacity for up to 8 thousand animals of 350 different species, spread by the 4.5 million liters of water. The environments portray life in the open sea and also some regions of the Brazilian coast, with sharks, rays, several kinds fish and many other marine animals. It's pure fun! The tour also has two museums: the Museum of Science - where you can explore the microscopic universe of sea creatures, and the Surf Museum - with pieces by surfer Ricardo de Souza, who tells the story of the sport in Brazil.  The structure also has a cafe, parking, research center, kiosks and a shop where you can get a souvenir of the visit to the aquarium.

Our hotels in Rio de Janeiro 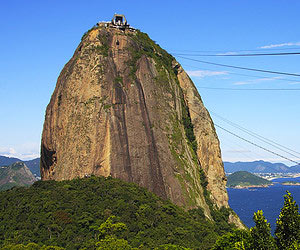