Just like many other Asian countries, sport is a huge part of the culture in Thailand. And, whether you want to participate or simply watch from the sidelines, there’s plenty of activities to get involved in. This guide to the most popular sports in Bangkok will help you get involved with some thrilling activities on your trip to Thailand.

Soccer (or association football, to give it its proper name) is huge in the capital city of Bangkok. In fact, the region is home to a number of impressive stadiums – with the Rajamangala holding as many as 65,000 football fans at any one time.

King Power’s continued partnership with reigning champions Leicester City FC has also heightened interest in the Premier League to a fever pitch. Visit any soi bar in the early hours of the morning to see a (very) noisy show of support for teams from the EPL and across Europe.

Where To Find Gear

When looking for soccer gear in Bangkok, you can’t go wrong with Mahboonkrong Mall. Also known as the MBK, the store is situated right next to the National Stadium Station and hosts a wide range of stores offering a great selection of soccer gear at very reasonable prices.

Tracing its history all the way back to the 16th century, Muay Thai’s status as the official national sport makes it an integral part of Thailand’s sporting culture. ‘The Art of the Eight Limbs.’ – so-called because it involves eight possible points of contact – is therefore widely practiced and studios and Muay Thai gyms are easy to find in many districts of Bangkok.

You’ll need a minimum of shorts, hand wraps and Muay Thai gloves to get started – but we aloso recommend investing in a mouth guard and shin guards.They’ll help to minimise any injuries during your first sparring sessions.
You’ll see signs for Muay Thai gyms and studios in Bangkok all the time, so it isn’t difficult to pick up sporting equipment. One of the best shops is Fairtex, in the ‘I’m Park’ shopping centre, in Pathum Wan. It is on the fourth floor and quite prominent, so it’s difficult to miss. Fairtex is probably the biggest seller of Muay Thai gear in the city.
It’s also very easy to find great Muay Thai gyms across Bangkok, but if you want a truly authentic experience at one of the more famous and historic gyms in the country, you might want to look into the Find Sor Vorapin Gym, which is located at the end of Khao San Rd and renowned for its authentic atmosphere, or theJitti Gym on Ratchada Road, which is very popular among expats and known for producing great kickboxers.

Golf is another big hit with affluent locals, who swap the bustle of Bangkok for country clubs in Bangplee, Bangkapi, and Klong Samwa during the weekend.<o:p></o:p>

Bangkok also caters for the golf enthusiast visiting the city for the first time, with a wide rnage of golf courses in and around Bangkok to choose from. The Alpine Golf Club (just outside of Suvarnabhumi) was the first hilly championship course in the country and consists of over 770-rai (1 rai = 1,600m2) of lakes, sandpits and other challenging obstacles. <o:p></o:p>

The Thana City Gold and Sports Club offers a 72 par course and it is located just twenty five minutes from the city centre – though be prepared to navigate weekend traffic if you’re travelling out of Bangkok on Friday evening. <o:p></o:p>

A lot of golf courses welcome walk-in players, though you’ll need to get hold of some clubs before you can head out onto the fairway though. Go browsing for Bangkok golf equipment at Thaniya Plaza, in Bang Rak - an entire mall devoted to golfing gear – or simply rent a set of clubs from your preferred course.  <o:p></o:p>

Bangkok might not be considered the safest place for cyclists because of the intense traffic, but with so much spectacular scenery to enjoy in and around the city, cycling is fast growing in popularity as a way to see the city and stay active. Bang Kachao, Benjakiti, and Lumpini Parks are all great places to get on the saddle and start exploring Bangkok’s cycling routes.

There are plenty of options for tourists looking to hire bikes, but one of the best is Go Bangkok Tours, located on Charoen Krung Soi, Bang Rak. Check out the company’s guided tours and excursions to avoid any confusion on the capital’s busy roads.
Whilst the appetite for foreign sport (and competitions) is arguably bigger than ever, Bangkok also boasts a diverse range of local sports and activities that cater for every age and skill level. So, whether you’re looking to unleash your inner Muay Thai warrior or hone your short game on the putting green, there really is something for everyone within this diverse, sport-mad city.

OUR HOTELS IN BANGKOK 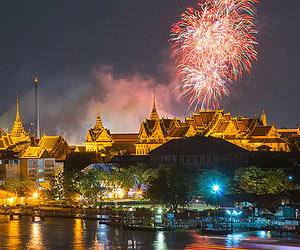 Here’s our take on the 5 New Zealand golf courses that are absolute hidden gems. 1 week