Glasgow has a proud industrial heritage, which is on display in its many museums, attractions and architectural points of interest. If you’re about to visit Scotland's largest city, this guide will help you retrace old steps and delve into Glasgow’s fascinating past.

Glasgow City Chambers, George Square
This iconic Glasgow building opened in 1888 and was designed by William Young. He gave it the largest sculptures of any building in the city to represent the industrial, commercial and cultural achievements. If you look carefully you will see that one of the sculptures is a Statue of Liberty.
The building was the first major building to have electric lights and you can still see the hand winches and electroliers today. When it opened it had several laboratories and you will see some of the scientists and engineers portrayed by the righthand side of the main entrance and by the windows. James Watt is one of them and he’s wearing knee breeches, see if you can spot him.
Thomas Graham Statue, George Square
The chemist Thomas Graham did pioneering work in dialysis and the diffusion of gases. His statue stands near the war memorial in the corner of George Square.
The Standards of Measure, George Square
As you pass through George Square keep your eyes peeled for the three standards of measure plaques. They were used by shop keepers, merchants and builders in the eighteenth and nineteenth centuries.
James Watt Statue, George Street
In the entrance hall of the University of Strathclyde’s Royal College Building you will find a life-sized statue of James Watt leaning on a steam cylinder. (There’s another James Watt statue on the Athenaeum Building in Nelson Mandela Place.)
Connal Building, West George Street
This Grade II listed building opened in 1990 and is covered in beautiful carvings of important figures in Glasgow’s history. There’s James Baird, director of the Caledonian Railway Company and the Forth and Clyde Canal, inventor James Beaumont Neilson, railway owner and ironfounder William Dixon, shipping magnate William Connal, amongst others. It is a building steeped in Glasgow’s industrial history.
Riverside Museum
The Riverside Museum contains exhibits from the former Museum of Transport and you could easily spend an afternoon here exploring as there are over 3,000 items. You can walk through the streets of Glasgow in the interactive displays and discover what it was like to live in the city in the eighteenth and ninetieth centuries. You’ll enjoy finding out all about Glasgow’s shipbuilding past too.
Summerlee Industrial Museum
If you’re fascinated by Glasgow’s industrial past there is no where better to visit than Summerlee Industrial Museum. It has been built on the site of a nineteenth century ironworks. You’ll be able to see the blast furnaces and go on a guided tour through a recreated mine. You can watch the machinery that was used when it was a working ironworks in action in the exhibition hall and go for a ride on a heritage tram on the electric tramway if you like. Afterwards, you can relax in the café and if you have any children, they can enjoy the playpark which is suitable for babies to teens.
Glasgow is a wonderful city with an interesting past, so you’re bound to have a great trip, whatever time of year you visit.

BOOK YOUR HOTEL IN GLASGOW Hotels Near Edinburgh Castle 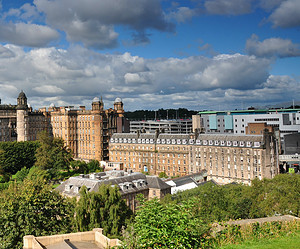 Top Things to do in Bonnie Glasgow

Our tips to visit Zurich

Relax in the Turkish baths during a weekend for two

48 hours to discover the best of Geneva