One of the UK’s longest-running pride events is held every year in Manchester and lasts for a whopping 10 days, climaxing in a 72-hour party on the August Bank Holiday weekend known as the ‘Big Weekend’.

One of the UK’s longest-running pride events is held every year in Manchester and lasts for a whopping 10 days, climaxing in a 72-hour party on the August Bank Holiday weekend known as the ‘Big Weekend’.
Manchester Pride is a registered charity that is famed for its efforts to ensure equality and defy discrimination. The charity strives to open up equal opportunities for lesbian, gay, bisexual and transgender (LGBT) people, and fundraisers for various projects throughout the year.
The Manchester Pride event is a vibrant celebration of the LGBT world and the parade attracts tens of thousands of revelers to take part in the festivities, that are largely centred on Canal Street. 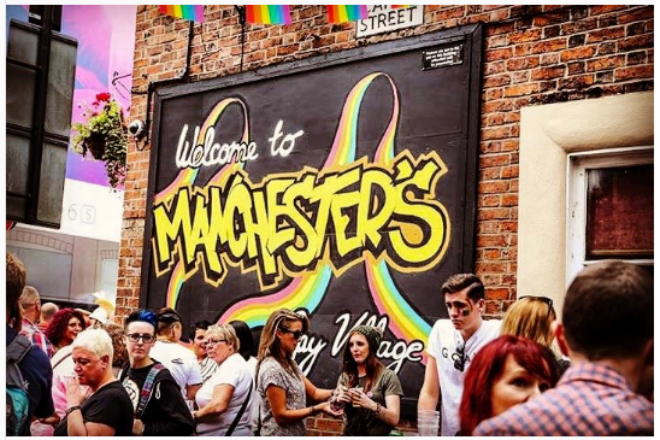 Image Source: @quinnyiam3
The parade begins on Deansgate and anyone can join in the fun for free. Other fun events take place within the Gay Village area and require you to pay an entry fee to enter what is called the ‘gated zone’.
We recently caught up with Sister Roma who is excited about visiting Manchester Pride 2017: “I've been told that the Manchester LGBTQ community is diverse, creative and welcoming. I can't wait to make new friends, explore Canal street, do some shopping, and of course celebrate Pride, the most colourful, magical time of year!"
You can expect to enjoy lots of dancing and singing, while everyone soaks up the fun-packed party atmosphere. If you fancy joining the shenanigans at Manchester Pride 2017, check out our guide below to find out everything you need to know about the event.

Manchester Pride has been going since 1985 and has gone from strength to strength. The event has also gone by several other names, including Mardi Gras and Gayfest but in 2003 it was given its current moniker ‘Manchester Pride’. Manchester Pride is like many other popular pride celebrations and partygoers should arrive to the festivities ready to have a whole heap of outrageous fun!
As well as being an entertainment-packed event, the vibrant street party also plays a key role when it comes to charitable donations and every year it raises tens of thousands of pounds for worthy causes. In 2015, the largest sum to date of £146,000 was raised, which was generated from entrance fees and generous donations, and it is hoped that Manchester Pride 2017 will smash the current record.
Chief Executive of Manchester Pride, Mark Fletcher, spoke to The Manchester Evening News about the success of the event: “The number of people that turned out for the Pride parade in 2015 was unprecedented. I was completely overwhelmed and we hope to get the same support and continue to be recognised on an international platform as a city that leads the way for LGBT life.”

Get dressed to impress

Every year welcomes a different theme and this year you’ll need to don your raciest graduation gown, embrace your inner Britney Spears and get ready to toss your mortarboards in the air, as this year’s theme is ‘Class of 2017: The Graduation’.
Leave all your inhibitions at home and join the colourful revelry wearing almost anything you want! Whether you want to get into the theme and dress like a funky student or you just want to look fabulous - absolutely everyone is welcome.
You’re free to be as wild and as wacky as you choose but if you really want to get into the spirit of the event, check out some ideas below for some of the best graduation-themed fancy dress outfits:
Feel free to stick to the theme or add your own glamorous additions such as feather boas, glittery headdresses and sparkly heels. A general rule of thumb is the more flamboyant the better but if dressing up really isn’t your thing, you’re more than welcome to join the merriment in your regular clothes.
Proud Trust Manchester had the following to say about the 2017 event: “Each year, we have a Pride Summer School where young LGBT people come to The LGBT Centre for two weeks of planning, crafting, painting and building, to help us decorate our truck for Pride and to create costumes and outfits to wear on the day!
Following the parade, we throw an after party, usually back at The LGBT Centre where all LGBT young people are welcome to celebrate with us, play games, get to know new people, perform, eat cake and have some fun - for free!
Pride is always on the August bank holiday so look out for our summer school posters towards the start of the month if you'd like to get involved!”

Check out the Manchester Pride 2017 line-up

Every year Manchester Pride attracts huge crowds of people from all walks of life and along with the revellers, there’s a host of famous names providing the entertainment.
Manchester Pride 2017 boasts a stellar line-up:
Keep your eyes peeled in the coming weeks, as more acts are set to be announced.
The festival consists of three main events, namely:
This year, the Pride Parade will take place on Saturday August 26th and begins on Liverpool Road, before heading to Deansgate, Peter Street, St. Peter’s Square, Portland Street, Princess Street and finally along Whitworth Street.
After the parade on Saturday evening and again on Sunday, silent discos will be held for those who like to boogie. On Monday, film buffs can enjoy cinema screenings of sing-a-long favourites, including The Rocky Horror Picture Show and Frozen.
The event will culminate in a Candlelight Vigil held on Monday evening to remember in quiet reflection those who have lost their lives to the HIV virus. The sea of glistening candles is a memorable sight to behold and attending the vigil is a magical way to wrap up the festivities of the Big Weekend.

How do I join the fun?

Manchester’s city streets will transform into a mega street party, made up of a kaleidoscope of colours. Dancers, spectators, musicians and marchers will accompany the glitzy floats and it’s easy to join in with events of the Big Weekend.
You can purchase a ticket prior to the event online through an authorised agent and this will be exchanged for an official wristband when you arrive at the entrance to the event. You will need to display your wristband at all times to gain access to the gated zone that consists of the event site, the main arena, the Gaydio Dance Arena, Sackville Gardens Boutique Stage and The Expo.
You can buy Big Weekend tickets that allow access to the events for the entire weekend or day passes.
Please Note: A portion of the ticket proceeds will be donated to charity.
If you want to cheer on the parade without entering the gated zone, you don’t need to buy a ticket. However, be prepared that some bars may charge an entrance fee if you want to enter during the Big Weekend celebrations.
Mark went on to add: “We’re a creative and forward-thinking organisation which is committed to delivering an engaging and fun Manchester Pride Parade each year. This parade is our way of bringing our theme alive through the personalities and creativity of the people, community and businesses who march with us.”
Psst! Want to know a secret? A brand new ‘Mystery Arena’ will be introduced at the 2017 Manchester Pride and can only be accessed through a secret entrance! You’ll have to keep an eye out for details on how to find this secret doorway during the build-up to the event or try and find it after you arrive.
Manchester Pride is an eclectic melting pot of values, philosophies, lifestyles, ethnicities and backgrounds where Lesbian, gay, bisexual, transgender, straight people and those who are thus far undetermined are all welcome to partake in the culture-filled shindig!