When visiting our INK Hotel in Amsterdam, you will automatically visit Amsterdam’s world-famous canal district that was added to UNESCO’S World Heritage List in 2010. The hotel is in the midst of it, residing on the Nieuwezijds Voorburgwal, a former canal that was damped in 1906 (not correct. It was damped in 1884) .

A ‘wal’ is Dutch for shore, so you’ll notice that many of the street names end with ‘wal’ because there used to be water everywhere! The street names often come from the 17th century and it’s this period - known as the Golden Age - that can be seen and felt in every street and corner of the city. In this article we’ll give you a first look into this beautiful area and focus on the architecture of the canal district.

During the 17th century Amsterdam experienced a massive economic boom that led to the creation of the canals around the city, designed to enable quick transport of goods. With vast amounts of money being made and a cultural hotspot growing with it, housing quickly became an issue and prices rose accordingly. Wealthy bankers and merchants found their ways into the expensive area and used the houses for a combination of purposes; as a warehouse, a working office and as a living space for their families. The basements and attic were mostly used for storage of goods like spices, cotton or cocoa. And with the danger of flooding in The Netherlands, the entrance was often located on the 1st floor, also known as bel etage. This was also where guests would be invited. Oh what lively times those must have been! During the centuries, a lot of the canal houses have been changed to create more space or to simply adjust to modern times. Nowadays, the results of this process can be seen in a variety of architectural styles.

For our guests that are interested in Amsterdam’s history, we’ve selected some key features and fun facts of Amsterdam’s architecture in the Golden Age. Our advice is to just wonder around in the neighbourhood of the hotel and to take a moment every now and then, there's a lot to been seen within a 10-minute walking range. Enjoy!

The soils were so swampy when the canal houses were built, that stilts were used to reach the deeper sand layers beneath the moisty soil. Over the years, this caused the houses to wobble and move a bit, so now they’re often a bit off kilter – on the corner of Geldersekade and Boomsloot you’ll find a striking example of this!

2. Pulleys in the attic

Because the goods were often stored in the attic and the stairways were not ideal to say the least, a special beam or pulley installation would be in the attic to hoist up valuable goods. Funny thing is that these are still being used to this day for when people are moving in or out the modern-day canal houses – check out the top floors to see the hooks that are used for it (example in the photo).

Broadly there are four types of facades on the canal houses that are mostly seen: stepped gables, neck gables, bell gables and frame facades. We will show you the key features.

The stepped gable is a traditional top facade where the topside narrows gradually at the top. It was widely used in Amsterdam because the wet climate requires steep roofs on which roof tiles can function optimally. Initially, the stepped gables were very popular in Amsterdam, but they were mostly replaced because of fashion motives. One beautiful example can still be found on Prinsengracht (see image).

The neck gable is a continuation of the stepped gable after being continuously simplified. With the ever-smaller steps, the image of a neck came into being. Most neck gables come from the 18th century, but the first of them were built in the 17th century. It is said that the very first can be seen on Herengracht 168, definitely worth a look!

A bell gable is a facade of which the top has a round shape like that of a clock. This was a continuation of the former neck gable, by adding more and more adornments to the straightened design. Eventually, the facades were built in the bell shape right away – without the ornaments.

A frame facade is a facade that is terminated by a cornice that extends over the entire width. This became gradually more popular in the 18th century because the appearance was chicer. But the replacement often had a practical reason too, namely that the older facades were worn out. We have one in our hotel as a matter of fact, as you can see in the photo and during your stay!

History of the INK Hotel Amsterdam

Our Amsterdam-based INK Hotel is also quite an example of Amsterdam’s history itself. The facade consists of three different canal houses of which two were built in times when the original canal was still there. Two of the examples we mentioned in this article can be seen in our hotel; the neck facade and the frame facade. The neck facade can be seen on number 65 (far left in the picture). This used to be a convent for pious single women, who became known as the Lekezusters under the Franciscan Order. The chapel foundations were revealed by excavation work in 1985 and a pieta  dating from 1566 was uncovered (a pieta is a picture of the Virgin Mary holding the dead body of Christ). Number 65 was once the Father’s House and to this day, the building is entirely original and includes 7 of the hotel’s suites. A few steps to the right, the frame facade can be seen on number 67 which is the entrance of INK Hotel Amsterdam. The black facade is what remains of this historic building, with the new hotel built behind it. As you enter the hotel you can see the different facades by looking up, both having the traditional hooks we mentioned as well.
Eventually, in 1904, the Roman Catholic paper De Tijd traditional printer company came into the part on the right that is known as Kasteel van Aemstel (the name is still written on the top floor). The architect A.J. Joling Christened the building this way in homage to the great play by Vondel called ‘Gijsbrecht van Amstel’. Other papers and press agencies like Algemeen Dagblad, Amsterdammer, Het Nieuws Van De Dag, De Telegraaf, De Volkskrant and De Standaard gradually came to the street as well, making it a centre of print and media. This is what gave the hotel the name and concept of INK, which is mostly seen in the design inside the hotel.

If you are more into edgy stuff and the buzz of the city, there are other fun tours to do: www.alltournative-amsterdam.com offers a range of tours including a street art tour and a graffiti workshop.
Got inspired? Visit our website to book your stay at INK Hotel Amsterdam. 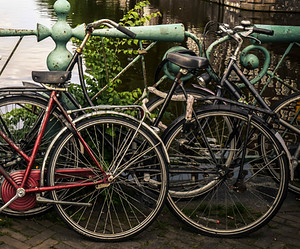 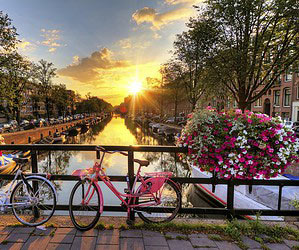 The Best Coffee Shops for Dodging Rain in Manchester

The Most Relaxing Experiences in the UK

Geneva: The United Nations, the World Health Organization, the ICRC…