Melbourne’s incredible street art is one of the city’s biggest tourist attractions. From hidden Banksy artwork to sky-high murals there is so much to see.

Nestled between Flinders Lane and Flinders Street lies Melbourne’s most famous graffiti spot, Hosier Lane. This lane is home to some of Melbourne’s most loved murals like the iconic 23-meter tall Indigenous boy portrait. With every inch of space covered in graffiti it’s no surprise Hosier Lane is always packed with snap-happy tourists.

This tiny little laneway is only 4m wide and is wedged between Melbourne’s jam-packed main streets. While this hidden gem isn’t as crazy as some of Melbourne’s other lanes, its understated beauty is why locals love it so much. It’s also the birth place of the now international festival St Jerome’s Laneway, which began down this little alley. The laneway’s current artwork still pays homage to its musical roots.

Named after the Australian rock gods AC/DC, this lane is a music-lovers dream. Take a wander down and marvel at the lane’s eclectic collection of gig posters and murals of famous musicians. If you look closely enough, you might even spot a Banksy. This lane may have lost some of it grunge over time but Melbourne’s famous rock music hotspot Cherry Bar still flies the flag for dirty rock ‘n’ roll. Come for the graffiti, stay for the live music.

If you continue walking along AC/DC Lane you’ll run into Duckboard Place. The place is distinguished by its larger-than-life murals that coat the lane’s sky-high walls. The lane’s most famous piece is a winding rose stem, lofting three stories up. This piece will leave you wondering how on earth the artist got up that high. Duckboard Place is also surrounded by some of Melbourne’s best eateries – try out Chin Chin or Tonka.

Stroll down Union Lane and you’ll be hit with an explosion of colour. Just off Bourke Street Mall this hidden gem should not be missed. Once a blight on Melbourne’s CBD, this lane was transformed in 2008 thanks the Union Lane Street Art Project. The once tag-covered lane is now a stunning street art gallery covered in creations by local and international artists. Murals down this lane are ever-changing so you’re always sure to spot something new.

Drewery Lane is a little different. Instead of graffiti-covered walls, this lane is dotted with hand-made ceramic tiles – all thanks to the The Drewery Lane Street Art Project. The lane is located behind the Legacy House, which is a charity supporting families of those who were injured or lost their lives while serving in the Defence Force. This project, run by artist Sankar Nadeson, teaches Legacy Families to create these ceramic tiles, which are then showcased on the walls. The project is set to display over 1000 tiles this year.
Want to discover more great things to see and do in Melbourne? Our Melbourne City guide will show you the way.
Image Credit: Tourism Australia 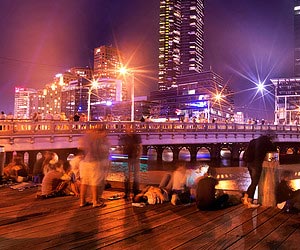 Riding on the big wheel in Melbourne 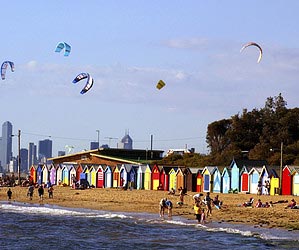 Scuttle along to the Mandurah Crab Festival

Free Events in Sydney This Season

Head along to the Dunsborough Arts Festival

What to do in Canberra this winter