Whether you’re into sport or not, there's no denying that it is an integral part of our culture. Yearly tournaments such as Wimbledon and the Masters, as well as major sporting events that occur less often, such as the Olympics and the football World Cup, capture the imagination of the world over, bringing people together in a way like nothing else can.

Sports may be a huge part of life, but very few people are aware of the history of some of our favourite sports and how they came to be.

We’ve looked into some of the most popular (and some lesser known) sports to find out their history – and of course, where in the world they originated from. And some might surprise you. 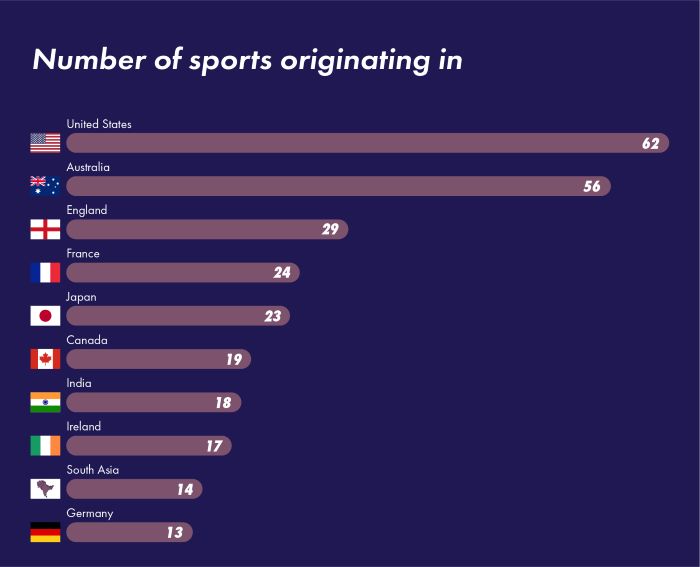 Tennis – France
Tennis may be most synonymous with the UK thanks to the oldest tennis tournament in the world – Wimbledon – but tennis actually originated across the channel in France .
Developed from a 12th century French handball game called Paume (palm) where the ball was hit with a hand – and later a leather glove – it eventually evolved to become Jeu de Paume which means game of the palm.
Over the years, both the tennis racquets and balls underwent a number of modifications. The balls, for example, were made from wood initially, but were changed to various other materials that would enable them to bounce. Thanks to monks from all over Europe who loved the game, tennis grew in popularity and continued to evolve.
The most popular historic player of tennis, King Louis X, didn’t enjoy playing outside, so was the first person to construct inside courts in the 13th century. However, it wasn’t until many years later that tennis got its name. Between the 16th and 18th centuries, Jeu de Paume was well loved and played regularly by kings and nobleman, and the French players would begin the palm game by shouting the word ‘tenez’, meaning play. From there, the game soon came to be called real tennis or royal.
During the 16th century – in 1583 to be precise – the first tennis racket in the history of the game was invented in Italy, and tennis as we know it today started to take shape.
On your next trip to Paris, why not visit the Jeu de Paume museum? This magnificent building, located within the Louvres gardens of Tuileries, was built under Napoléon III in 1861 to welcome Palm game courts. It was transformed into a contemporary art museum, which is easily accessible from the Pullman Paris Tour Eiffel.
Parallel bars – Germany
A staple of the Olympics since the modern Olympics began, parallel bars were invented in Germany by the grandfather of gymnastics , Friedrich Ludwig Jahn . Originally the three trestles that he called the ‘Hasenheide’ were solely designed to be used to do supporting training exercises on.
However, as they had to be secured to the floor, they soon became the equipment of choice for gymnasts. As such, in 1819, the Spanish Amoros described the first transportable parallel bars, which were built by Kluge, a Berlin based pharmacist.
By the mid 19th century, exercises which included static holds and pressing on the bars were common, while swinging skills were still yet to be widely developed. However, this did change not long after, with swing moves becoming popular as gymnasts experimented with the bars. As parallel bars became more popular through the 20th century, there were huge discrepancies in how the bars were made; some were made from flexible wood rails, while others were made from inflexible iron rails. Therefore, it was impossible to perform every move interchangeably. This finally changed in the 1940s, when the bars themselves were standardized for training up to the 1952 Helsinki games.
We have six hotels in Germany, including Cologne, Munich and Stuttgart. You can explore all our hotels in Germany here.
Boxing – Egypt
Boxing is one of the oldest sports on our list. Dating back to 3000 BC, the earliest instance of boxing recorded was by the Egyptians, showcasing both boxers and spectators . However, unlike modern boxing, there were no gloves or hand coverings to protect their fists.
The first instance of boxing as we know it today came from a vase carving dating back to 1500 BC. It showed boxers wearing a helmet and rigid plate attached to the fist.
As boxing became more popular, it was introduced at the Olympic games in the 7th century BC . By this point, contestants wrapped their hands and forearms in leather binds to protect their skin. This was later changed to a glove with metal studs by the Romans. From there, the sport developed, and amateur boxing with weight classes were introduced, before making its debut at the modern Olympic games in 1904.
Skeleton – Switzerland
Unsurprisingly, the skeleton was created in a country known for snow; Switzerland. But it came perhaps later than many may think. The first track used was made in 1882 by English soldiers, leading from Davos to Klosters in Switzerland, however the skeleton didn’t come about until a decade later – in 1892.
There are two theories as to where the origin of the skeleton name. According to history, the first skeleton sled was invented – somewhat by accident – by Englishman, Mr. Child. He created a metal sled to surprise his friends interested in sport, which some commented looked like a skeleton. This is theory one. The second theory comes from the claim that the name ‘skele’ is from an incorrect translation of the Norwegian word ‘kjaelke’ into English.
The skeleton's popularity grew, and in 1905 the sport spread to other countries in Europe, with contenders at a bobsleigh competition practicing the skeleton. Just a year later, a championship was held in Austria, with bi-yearly competitions held thereafter until 1910. Despite being popular across Europe, it wasn’t until 1926 that the skeleton was announced as an Olympic sport, and in 1928, the first medal for the skeleton was won.
Chess – India
Chess has enjoyed a resurgence of late, with thousands of new players thanks to pop culture references. Often incorrectly named as the oldest board game in the world, chess has spread across generations for thousands of years.
The earliest forms of chess originated in India in the 6th century AD , and borrow a lot of elements from the four-player war game, chaturanga. From there the game travelled to Persia and throughout Asia. As such, it is often agreed that the game became what it is today as a result of a number of changes and developments until the 15th century when its final form is thought to have taken shape .
Three centuries later, in 1886, the first official chess World Championship was held, and the game has withstood the test of time ever since. 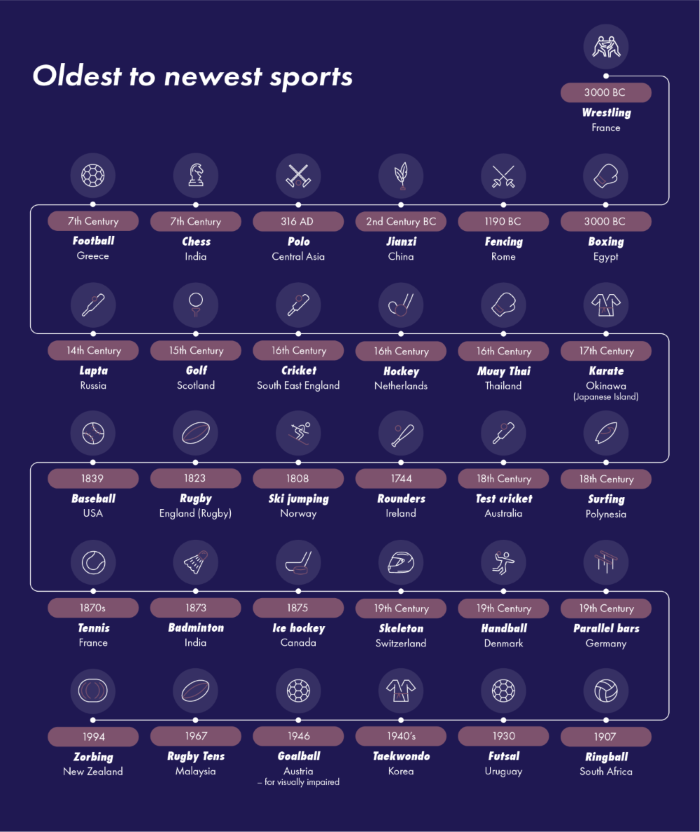 See where some of our other favourite sports originated around the world on our map. 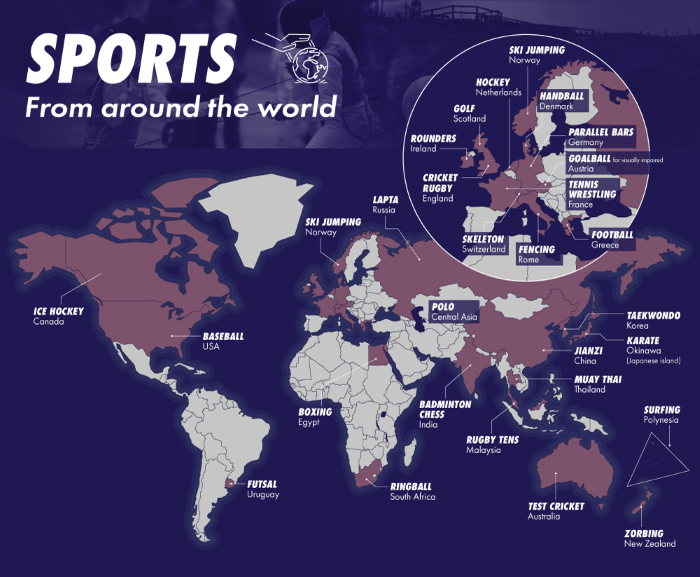 Sport plays a huge part in lives all over the world, and in the UK, sport plays a huge role in our culture, and as such, many of our cities’ hearts are cemented in sport. Manchester, Liverpool, Leeds, and Cardiff all boast huge sporting cultures with stadiums, courts and pitches peppered around the cities.
If you’re looking for a UK break this year, why not head to one of the sporting hubs? Pullman hotels are located all over Northern Europe, such as the United Kingdom, Steeped in history, Liverpool is perfect for a break from it all, while Leeds and Manchester are surrounded by stunning countryside. Cardiff, on the other hand, is modern, vibrant and eclectic with its own unique culture.