If your business continues, we are on hand to welcome you in best possible conditions with catering solutions in Room Service and delivery. We're labelled ALLSAFE: book in complete confidence! This label, developed with/approved by Bureau Véritas, represents our new standards of cleanliness and prevention and ensures they are respected in our hotels. FLEXIBLE RATES: Cancellable until day of arrival.

The Ibis Brest Centre hotel is located in the city centre, close to the port and 500 m from the Convention centre. You can explore the Sea museum, and also the aquariums of Océanopolis and the ancient castle built during the Gallo-Roman period. Located 1 km from the railway station and 7 km from the airport, it proposes 71 refurbished rooms for booking, a bar open 24/24, public outdoor parking and Wifi wireless Internet connection for guests on a business trip.

At the bottom of rue de Siam, near the Pont de Recouvrance. Near the harbor (ferry links to islands), château (navy museum), Océanopolis, and the Moulin Blanc beach.

Enjoy a wide selection of internationnal drinks and beers, along with our 24/7 snack food available at the bar or to take in rooms. 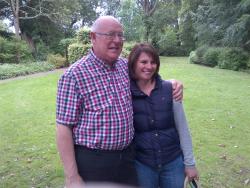 We visited Finistere for a 24 hour trip to top up on vital French commodities. We chose the Ibis Hotel because it was right in the centre of Brest. Our SatNav found Rue de Siam easily but delivered us to the top of the street only to find that the hotel was right at the other end. Problem being that the Tram lines system had taken over movement along the street at the expense of normal traffic. we had to navigate on another street parallel to Rue de Siam. The Staff at the Hotel were very friendly and helpful. There is private parking at a small cost, the Receptionist was most concerned that we drove very slowly and carefully into the `Parking` because it is very tight & narrow. The Rooms are very pleasant & modern. The bed very comfortable and the shower refreshing (not like a pressure washer). My Brother in Law had a room at the front of the Hotel which was similar except a Night Club just along the street played load music until the early hours. The Breakfast Buffet was very varied and full of quality food and drinks. I enjoyed very much my stay in Hotel Ibis Brest Centre and would book again.