The Kingdom of Bahrain, although largely cosmopolitan in nature, holds on to its rich culture and traditions. The land of two seas, as it is rightfully called, is peppered with unique historic monuments and modern architectural wonders that blend seamlessly with the cultural heritage of its ancient pearling trails through the archipelago. Bahrain packs in plenty of things to do and sights to see for avid travellers, especially for those with a love for culture and history.

Marvel at the fascinating Tree of Life

The beauty of a solitary tree standing by itself, with no other trees or shrubs in sight for as far as your eyes can see, in a sun-bleached wasteland induces a visual sense of wonder in travellers. The surreal landscape of dersertland with this 10m-long Mesquite tree, which is believed to be approximately 400 years old, is an unbelievably fascinating spectacle. The tree of life has been growing resiliently in the barren expanse of the desert, offering a stunning vista that slows time to a standstill.

Feel the need for speed? A place that warrants a visit from motorsports enthusiasts in Bahrain is the Bahrain International Circuit (BIC). Home to the Gulf Air Bahrain Grand Prix, GP2, drag races and endurance races since its opening in 2004, BIC is a premier motorsport facility that is also one of the most popular F1 Grand Prix circuits around the world. A tour along the tracks and it is hard not to see why racecar drivers and race goers love the circuit. Luxury VIP lounges, five-star catering services, premier conference area and Sakhir Tower, an iconic eight-storey VIP tower are some top of the range facilities available to visitors.

A place that brings the country’s rich and compelling history to life is the National Museum of Bahrain. Tour the museum to learn about its fascinating past and get a taste of its heritage. Its rich collection of national treasures spans 6,000 years of Bahraini history, which can be seen through historical artefacts that recount the Bahraini life from the early Dilmun settlement through the ancient pearling days into the present. The museum also displays an array of well-preserved exhibits and specimens that recall the natural environment that existed around the time of oil discovery, and depict the condition of its flora and fauna.

Tour the Timeless Elegance of the Bab Al Bahrain

One of the major tourist attractions in Bahrain and an emblematic landmark is Bab Al Bahrain, popularly known as the ‘Gateway of Bahrain’. It is a large, arched Islamic monument, located at Customs Square in the former Central Business District of Bahrain, which was built by the British in the early 1940s to house government administrative offices in the city. Later, the monument ceased to be the centre of all government executive activities and was renovated during the late 1980s to house a tourist information office, handcraft shops, and now marks the entrance to the Manama Souk. The gateway faces out to the sea and forms a part of the Government Avenue, which includes government offices, the Gold City shopping complex, banks and business establishments.

The ancient Qal’at Al Bahrain - one of the most visited attractions in Bahrain & a UNESCO World Heritage Site - is an archaeological site believed to be the capital of the ancient Dilmun settlement. Dating back nearly 5,000 years, the prehistoric harbour was once heavily inhabited by the Dilmun civilization between 2,300 BC and the 16th century AD. Later on, a part of the site was renovated and used as a surveillance point by the Portuguese military to protect trade routes to India, Africa and Europe. The fort has been well preserved since then, and its architectural design and historical significance represent the architecture of the region’s culture. 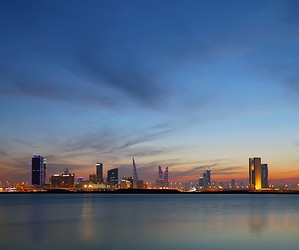 Discover the November full moon festivals of Cambodia, Thailand and Myanmar with us! 1 week