The capital city of Algeria has alternately been Phoenician, Roman, Byzantine, Ottoman and French, something no one should be indifferent to. The city is noble mix between large avenues lined up with white-walled buildings, a souvenir of the French, socialist looking monuments and a Muslim atmosphere. From up on the grassy hill where the Casbah stands, the town goes down to the sky-blue bay.

Walking on the footsteps of History

As soon as you set foot in Algiers, and right from the airport, you cannot help but notice how white the city is. On your way downtown, you drive across the green hills and from time to time you come across a touch of bougainvillea’s’ deep purple. Smells of mimosa, pine trees, spices and coffee are mixing with each other. Behind you the Casbah, the typical Islamic citadel and Arab-berbere Medina- old town-, part of the UNESCO World Heritage, smells of grilled lamb. While strolling in the narrow streets of the old town, you should not miss the Ketchaoua Mosque, once turned into a cathedral. You will find traces of the past on its walls, from Romano-byzantine to Moorish or Turkish-Arab architectural influences. Keen on cathedrals? Do not miss the Neo-byzantine cathedral “Our Lady of Africa” whose inscription “Our Lady of Africa, pray both for us and the Muslim” celebrates a hopeful communion. As far as museums are concerned, the oldest in Algeria “the Museum of Antiquities” holds objects related Rome and Islamic Algeria and is set in a Moorish building dating back to the Ottoman. From up there you can see to the bay. You can also enjoy a visit at the Bardo Museum, located near the Arts and Tradition museum and the fine Arts Museum, and discover its enchanting mosaics and its exhibitions dedicated to Prehistory.

From palace to palace

Algiers has plenty of majestic monuments such as Dar Hassan Pacha in the Casbah. Napoleon the third and his wife Eugenie stayed over in this palace, built in 1791. It was the winter palace of Algiers governor during colonial time and symbolizes the diverse past of Algiers. Go to the Raïs Palace and enjoy the gorgeous view of the sea. As a bonus to travel back in time, you can have a look at the Great Post and its arcades across the harbour. There, enjoy a cup of a full-flavoured coffee, traditional of Algiers. In the city, and mostly near the harbour if you feel like tasting some amazing food, just follow the smells. Tasty grilled meat, fresh fish, French, Mediterranean or local cuisine, have a taste of it all!

Between grassy hills and blue-sky sea

The garden of Essai, a spectacular garden located in the heart of the city, a replica of a garden à la française, you can get away from the biting sun and enjoy the shadow of tropical trees. You can have a look at the triumphant yet peculiar Algerian war memorial. Want to relax between meetings? Algerians love to walk along the beautiful shore. Follow their lead! Tipasa, 50 miles West of Algiers, is awaiting. There, relax and be amazed! The landscape, with its Roman ruins by the sea will cast its spell. Jean Grenier and Albert Camus have been bewitched before you.

Our hotels in Algiers 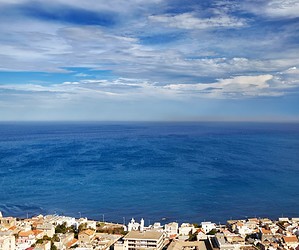