We are delighted to welcome you back safely to our hotel. To continue to protect others, we would like to inform you that we are now a CASHLESS HOTEL. We look forward to welcoming you soon.

Our city centre location is hard to beat and, when you add in our 146 low-cost en suite cocoon rooms, 24hr reception and free fibre Wi-Fi throughout, your trip to Northern Ireland's captivating capital is off to a great start.

At Hotel ETAP Belfast, we make sure our friendly team is on hand around the clock to make sure you're never left in the lurch. So whether you want breakfast in the morning, a cup of tea at 2 PM or a piping-hot pizza at 3 AM, you only have to ask. With our pet-friendly setup, we're one of the few hotel chains that happily welcomes furry friends as well as their owners, so bring them along for the adventure!

The hotel is located only five minutes' walk from Belfast Central train station. The central location of the hotel means that the waterfront, Belfast Cathedral, Titanic Quarter, shops and restaurants are all within walking distance. The birthplace of RMS Titanic and a filming spot for Game of Thrones, Northern Ireland's capital is becoming increasingly cosmopolitan. Popular attractions include the Titanic museum and studios, City Hall and Botanic Gardens.

The birthplace of RMS Titanic and a filming spot for Game of Thrones, Northern Ireland's capital is becoming increasingly cosmopolitan. Popular attractions include the Titanic museum and studios, City Hall and Botanic Gardens - all within two miles of us.

Enjoy a pizza and a drink with us

Start your mornings with our full English and continental breakfast options

Room with large bed for 2 people

Hotel room was clean but it’s laid out like a prison room no space what so ever Bouncers at door wow I have never met two more hateful guys in my life wow I never write stuff like this but they were complete di**** I would highly recommend never to stay in this hotel!!!

Dear Petmc, I was sorry to learn that your stay on this occasion fell short of your expectations and I apologies for any discomfort or inconvenience caused. You have clearly raised some points which need addressing, and I thank you for bringing these matters to my attention so we may investigate the shortfall in service to ensure we do not see a reoccurrence.

No. And I really wanted it to be a yes. I don't usually give bad reviews - if something goes wrong, I usually chalk it up to that person having a bad day or once off issue. Things go wrong all the time, I get it having worked in customer service since I was 16. However, there were so many things wrong with the ETAP hotel, I want to fore warn anyone who is considering staying here. Don't. It's that simple. Cheap price, in this case, means you are getting below the bare minimum. It says hotel, but really it's a glorified hostel. Fine if that's what you're looking for, disappointing if not. For 5 days, we paid nearly 600 pounds (that didn't include the parking!) 1. The Room. The room was only checked once (by our request because trash was overflowing) - the solution? We were given a trash bag. The towels weren't replaced, and twice we had to ask for fresh towels at the main desk. When the room was checked, some of our belongings were stepped on and broken. The floor wasn't swept/vacuumed, toilet roll replaced (again we had to go down and ask for toilet roll), nor was the shower given a once over. The second time the room was attempted to be cleaned was at 6pm while me and my husband were in the middle of getting ready for New Years Eve. We had been out of the room from 10am until about fifteen minutes before the knock sounded on the door. And yes, we had put the notice on the door handle letting the staff know the room was available. before we went out. Ridiculous. 2. Door security. Never have I stayed in a hotel that had its own security on the front not only dealing with drunks outside (which is totally fine and expected in a city center) but was there for guests as well! 3. Breakfast was included. It consisted of overcooked sausage, tomatoes, hash browns and rashers. No eggs. We thought it was a once off, but each morning it was like that. Not a huge issue, just very odd. It was a buffet style/continental breakfast. Just really weird. 4. The rooms are minuscule. And I mean minuscule. From the pictures it looks like a small but okay size room. There was less than a foot of space between the end of the bed and the wall. The side closest to the window had less than two feet with cheap shelving making getting around the bed awkward and tight. The shower and bathroom were separate in kind of like a pod style (totally fine) with the sink in the room with a tiny shelf. There was no kettle and no place to put bags/suitcases. There were five hangers on a faux closet, that was so narrow and shallow, nothing hung right and bags kept falling off. The room was cramped and moving around it was a joke. The bed was hard and the temperature controls were all over the place. The room was either the temperature of the sun or arctic. There also was no plugs near the bed, so charging phones or anything was annoying. 5. Parking. The ETAP has an arrangement with the NCP car park across the road from it (despite a massive car park behind it) so that you get a discounted price from 18 pounds if you go over 4 hours dropping to 12 pounds. You'd think they would figure out a way for it to be less - over 60 pounds the the 5 days there - a bummer. Look, I get things go wrong all the time. The staff seemed stressed, but were friendly, just ineffective. It stung more that this was over the New Year break and we were hoping for a relaxed stay, instead of a bunch of annoying things just often enough to sour the trip.

Dear bmnish1990, I was sorry to learn that your stay on this occasion fell short of your expectations and I apologise for any discomfort or inconvenience caused. - In the first instance, may I offer my sincere apologies for the poor service you received on this occasion. Please be assured that this is not a true reflection of the high standards upon which Ibis ETAP prides itself.

Perfect spot to put your head down

Absolutely perfect spot to put your head down. Although not a luxury hotel it really is fantastic value for money. Lovely, friendly staff amd the manager was great! 24/7 freshly made pizza is absolutely amazing!!!!! I will definitely visit again soon!

Hi Trip505357, We welcome all feedback that we receive from our guests, including positive comments which help us to recognize and reinforce excellent service within the team. I was pleased to read that you had enjoyed your stay and I will certainly pass on your comments to my team. I know that they will be delighted to learn that their efforts have been appreciated and remembered.

The worst ‘hotel’ in Belfast!

Room was dirty, very small and uncomfortable for a family of 3 staying there. Not suited for people who suffer from anxiety due to people being allowed to come and go from the night club next door. Had to keep asking for fresh milk from staff as there was sour milk lying at the tea facilities obviously all day long so whenever we went for tea it was a pain asking staff all the time. First room we checked into the window was broken and awful draft. Second room we got after that was filthy. Was staying with my mother and 13 year old brother so whenever one wanted a shower, 2 of us would have to leave the room as there was no privacy for the shower you could see right through the shower glass and the shower is in the middle of the room with a mirror across from the bed looking into the shower, so that was inconvenient for us after a day out in the town wanting to relax and can’t even have a shower in peace. Got a double bed with a bunk bed and neither of the beds were clean, stains all over the sheets clearly were not changed to clean bedding upon our arrival. Beds were not comfortable at all nor were the pillows. The toilet is in the smallest little closet like room, bearly enough leg room as your legs are hitting the door. On the first night myself and my mother went downstairs outside the hotel at around 12 midnight for a cigarette and on the way down in the lift there was urine all over the lift floor with an awful smell. We stead downstairs for a cigarette and a cup of tea in the foyer so were downstairs for maybe 30 minutes, and when we were going back upstairs the same lift still had the urine all over the floor. Nothing seemed to be cleaned at all. Staff having the deal with drunk people coming in and out of the foyer pretending they booked a room with a friend and starting fights it just wasn’t pleasant at all. Got a taxi from the city centre to the hotel on our first night and the taxi man even said to us ‘oh you’re staying in the worst hotel in Belfast’ we soon learned he was right. From working in a hotel myself this is definitely not the kind of experience you expect for £186 for 2 nights, definitely not worth it and won’t be back.

Dear Sarah, I was sorry to learn that your stay on this occasion fell short of your expectations and I apologise for any discomfort or inconvenience caused. - In the first instance, may I offer my sincere apologies for the poor service you received on this occasion. Please be assured that this is not a true reflection of the high standards upon which Ibis ETAP prides itself.

Very clean room, fast check in & out. Rooms were small but complete and stylish. Beds were comfortable and enough pillows in room. Room was nice and warm for the weather that we had. Free tea or coffee for the duration of your stay was brilliant and very secure hotel for safety

Dear Megangriffin, We welcome all feedback that we receive from our guests, including positive comments which help us to recognize and reinforce excellent service within the team. I was pleased to read that you had enjoyed your stay and I will certainly pass on your comments to my team. I know that they will be delighted to learn that their efforts have been appreciated and remembered. 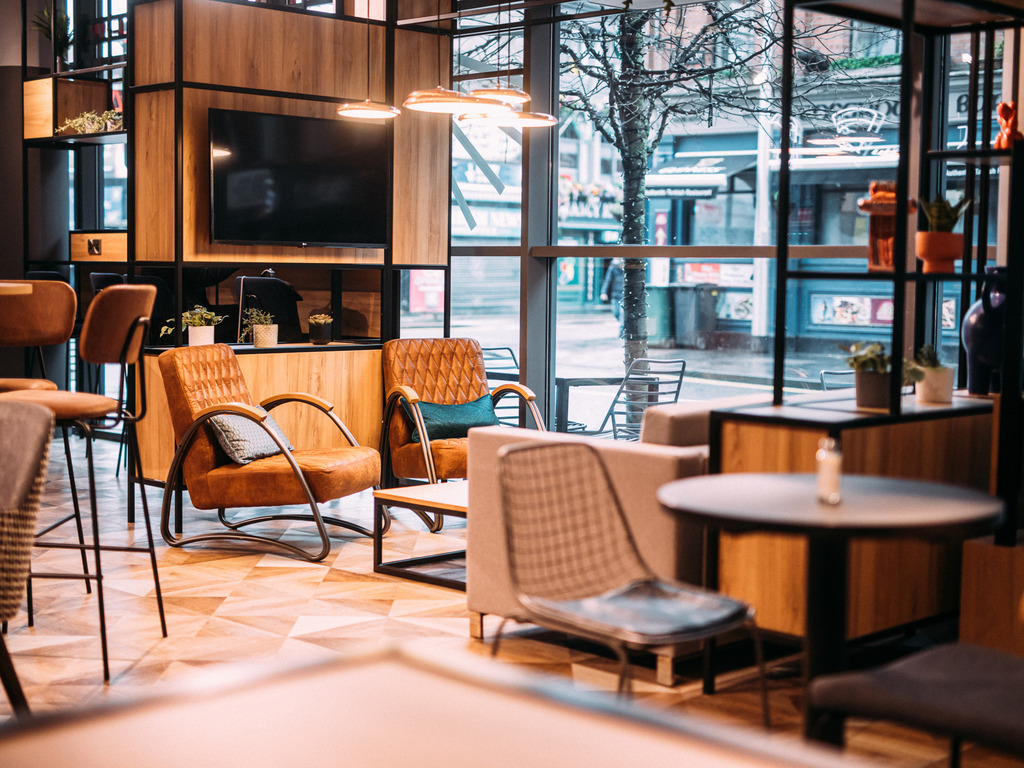