The history of Paris as a settlement stretches back to before the birth of Jesus Christ. Consequently, it boasts a rollercoaster history that has seen it positioned at the heart of many world-changing events. It's not surprising, then, that visitors can find numerous, varied, and breathtaking monuments that each possess their own unique and revealing story. Today, we are going to offer a brief overview of some of the most impressive Paris monuments: What exactly is it about each one that makes it such a compelling attraction?

A masterpiece of gothic architecture, an iconic representation of the city's artistry, and one of the very best Paris monuments to be enjoyed without paying a cent: The Notre Dame Cathedral is an experience as much as it is a landmark. Climb the many stairs of its towers and stand among the gargoyles and chimeras that have simultaneously delighted and terrified thousands. They have also set a suitable backdrop for Victor Hugo's dark and tragic novel, The Hunchback of Notre Dame. The cathedral recently celebrated its 850-year anniversary and pilgrims and tourists alike are welcomed through its doors every day to see the splendid interior. Many simply come to experience the choral music accompanied by numerous organs. And, of course, one can't forget the chance to listen to/withstand the toilsome bells of the cathedral, which number 10 in total. Notre Dame Cathedral sits on the banks of the Seine and the top of its towers offer some of the best views of the city. A visit at Christmas time is highly recommended to see the stunning Nativity scene that is set up inside the cathedral.

Standing atop the Arc de Triomphe, it is very easy to feel like one is standing at the very center of the beating heart of Paris. Twelve separate avenues emanate from where you stand, including the world-famous and truly breathtaking Avenue des Champs-Élysées. This Paris monument is a tribute to all those who fought and died in the French Revolutionary and Napoleonic Wars. It is also partly a tribute to Napoleon's own considerable ego! However, the Arc's position at the heart of the nation's consciousness is evident in the poignant flame of "The Unknown Soldier." This flame is rekindled each and every day, standing near the tomb of a nameless warrior who was buried here at the close of World War I. Tourists don't have to reach the monument itself to take it in: The Arc can be seen from both Place de la Concorde and the Esplanade de la Défense.

The Pantheon started its life as a church but has since been converted into one of the most famous necropolises in the world. Notable residents include the likes of Voltaire, Victor Hugo, and Rousseau. Aside from poetic and political pilgrims, visitors to this Paris monument are also likely to share space with the odd science historian. As well as being the home of Marie Curie's remains since 1995, the Pantheon was also the site of Léon Foucault's famous experiment in 1851. This pendulum experiment proved conclusively that the earth revolved around its axis. A replica of the pendulum still swings in the Pantheon today. Modeled on the Pantheon in Rome, the beautiful white exterior of the building is rendered in a neo-classical style that contrasts interestingly with the gothic interior. A position just outside the dome sitting atop the building offers arguably one of the best views of the city.

The Sacré-Coeur: a jewel among the many Paris monuments

Completed in 1914, the magnificence of the Sacré-Coeur makes it a fitting rival for the slightly more popular Notre Dame Cathedral. Sacré-Coeur was built at a time of political and social upheaval. Its construction was meant as both a push-back against the Paris Commune and a national penance for defeat in the Franco-Prussian War. Considered a jewel among the many Paris monuments in the city, it stands atop one of the highest points, one of ancient spiritual significance. Reported to have once been a sacred sight of pagan worship, Sacré-Coeur was also the site of ancient Roman temples to Mars and Mercury. The church is surrounded by beautiful gardens where citizens and visitors take their ease, enjoy picnics, and relax and enjoy music on warm evenings. Inside, you can find one of the world's largest mosaics and what is widely considered one of the finest pipe organs in the world.

If we were to say "cast-iron architecture" and "Paris" to you, you'd be forgiven for thinking we meant the impressive Eiffel Tower. Indeed, there is much to be said about the most popular and iconic of Paris monuments. Don't forget its peculiar journey from being considered a gaudy monstrosity to becoming a symbol of national pride. However, as so much has already been said about Gustave Eiffel's lattice tower, we thought we'd dedicate some time to another, lesser-known wrought-iron wonder. The Bibliothèque Sainte-Geneviève is constructed from a cast-iron frame that is itself a daring feat of engineering. It is primarily a university library and study space but tourists are allowed to view it between 9am and 10am by appointment. The bibliophile's paradise was used as a location for the Paris-centered Martin Scorsese film Hugo. Visitors often speak of the almost sacred and otherworldly atmosphere of the hall, as well as the breathtaking impact of the iron-laced architecture.

Les Invalides, also know as Hôtel national des Invalides, is a massive complex of buildings originally built to house wounded or convalescing soldiers. While it still operates in this role to a limited degree, it is now most famous as the final resting place of Napoleon Bonaparte. This makes it stand out among the list of Paris monuments, especially for Parisians. Most buildings in the superstructure are used as historical museums, mainly military in nature. Particular highlights include the Museum of Military Models, which houses a large number of detailed miniature recreations of other cities. These models were really used by military tacticians to help plan attacks. The most impressive building of the complex is undoubtedly the Dôme des Invalides. This resplendent construction is based on St. Peter's Basilica in Rome and was built to house the remains of Louis XIV. It is now also the final resting place of Napoleon. Visitors can see his sarcophagus surrounded by numerous marble statues, which are tributes to his victories. The building also stores the remains of many other military heroes and notable persons.

The pyramids of the Louvre

Like the Eiffel Tower, the large glass-pane pyramid that stands in the courtyard of the Louvre museum engendered a great deal of ire when it was created. However, like the famous iron tower before it, the Louvre Pyramid has now become a beloved and important icon for the city. What is often forgotten is that there are actually four other pyramids to be found at the Louvre. Three surround the main one, bringing natural light to the artifacts below. An inverted pyramid also hangs beneath the main one and can only be viewed from underground. The main pyramid has the same dimensions as the Pyramid of Giza. It is said to be a nod to the importance of the Egyptian collections that have been part of the museum throughout the years. The Louvre building itself dates back to the 12th century and was originally a fortress. These military remains can still be found among the museum's foundations.
We highly recommended the Paris monuments mentioned above. The simple fact, however, is that the French capital boasts a plethora of fascinating monuments and attractions that are too numerous for any single list. The strong temptation to rush from one monument to another is understandable. We recommend that, alternatively, you schedule sufficient time at each one. This will allow you to dig in and get a sense of the importance, gravitas, and relevance of the monument you are visiting. Which monument affected you the most? Tell us in the comments below. 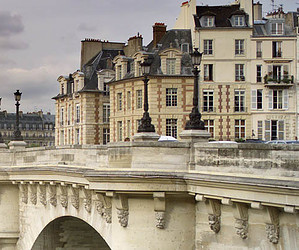 Getting to Know the Paris Districts

How to make the most of the winter season