Whether you want to participate or cheer wildly from the stands, here’s a guide for sports lovers visiting the Thai capital — including where to buy Muay Thai gear and golf equipment in Bankgok.

Soccer, Muay Thai, golf and cycling in Bangkok are popular among locals and tourists. As in many countries, taking part in community sports is a great way to make some friends and experience the local culture. Whether you’re in for a competitive or recreational workout, immerse yourself in these thrilling activities on your next trip to Thailand.

Probably the most popular of Bangkok sports, the global draw of soccer (or association football, to use its proper name) is felt strongly in the Thai capital. In fact, the region is home to a number of impressive stadiums — with the Rajamangala Stadium boasting a capacity of almost 50,000 people.
Thai travel retail group King Power’s partnership with recent English Premier League champions Leicester City FC has heightened interest in the Premier League to a fever pitch. Visit any soi (side street) bar in the early hours of the morning to experience a (very) noisy show of support for teams from the EPL and across Europe.

Where To Find Soccer Gear in Bankgok

If you’re itching to kick a ball around with enthusiastic local fans, get kitted up at Mahboonkrong Mall. Also known as the MBK, the mall is conveniently situated right next to National Stadium BTS station and hosts a wide range of shops offering a great selection of soccer gear at reasonable prices.

With a history tracing back to the 16th century, Muay Thai’s status as the official national sport makes it an integral part of Thailand’s sporting culture. Known as “the Art of the Eight Limbs” is a kick-boxing martial art widely practiced all over the country and the world. Studios and Muay Thai gyms grooming current and future champs are easy to find throughout Bangkok.

Where to Find Muay Thai Gear in Bangkok

The basic Muay Thai gear consists of well-fitted but stretchy shorts, hand wraps and kick-boxing gloves. We’d also recommend investing in a mouth guard and shin guards, in order to minimise injury during your first sparring sessions.
Kick-boxers from all over the world come to Bangkok for authentic Muay Thai gear. One of the best places to shop is Fairtex on the fourth floor of the I’m Park shopping centre at Pathum Wan. Fairtex is probably the biggest retailer of Muay Thai gear in the city.
It’s pretty easy to find great Muay Thai gyms across Bangkok, but if you want a truly authentic experience at one of the more famous and historic gyms in the country, you might want to get in the ring at Sor Vorapin Gym in the Taling Chan neighbourhood. Jitti Gym just off Ratchadaphisek Road is also popular among international enthusiasts.

Golf is another big hit with players around the world and more affluent locals, who often escape the congestion of Bangkok’s city centre for lush country clubs in Bangplee, Bangkapi and Klongsamwa.
Affordable and well-maintained, there are several great golf courses in and around Bangkok to choose from. The Alpine Golf Club (just outside of Suvarnabhumi) was the first hilly championship course in the country and consists of over 770 rai (1 rai is 1,600 square metres) of lakes, sandpits and other challenging obstacles.
The Thana City Golf and Sports Club offers a panoramic 72-par course and luxurious clubhouse facilities. Located just 25 minutes from the city centre, the course is open for play year-round and is recognised as one of the best golf training centres in the region.

Where to Find Golf Equipment in Bangkok

Get swinging with some brand-new clubs from Thaniya Plaza, where you can find the largest selection of golf equipment in Bangkok. The mall is almost entirely devoted to golf equipment, from attire and shoes to rangefinders and clubs. Alternatively, you can rent a set of clubs from most courses to travel light.

Bangkok might not be considered the safest place for cyclists because of the intense traffic but just outside the city, cyclists can enjoy some spectacular natural scenic routes. Cycling and bicycle tours in Bangkok  are quickly gaining popularity as a way to explore the city’s surroundings and to stay active. Bang Kachao, Benjakiti Park, and Lumpini Park are great cycling destinations to start with.

Where to Find Cycling Gear in Bangkok

Rent a bike or join some of the best bicycle tours in Bangkok with Go Bangkok Tours, located on Charoen Krung Soi, Bang Rak.
Bangkok sports are diverse and accessible for all ages and skill levels. Have some fun and break a sweat while enjoying Bangkok’s sports — one of this cosmopolitan city’s defining cultural experiences. 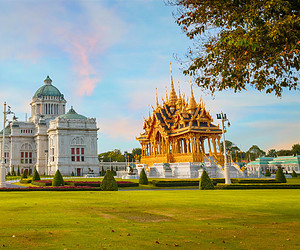